History: It All Started on Toad Lane 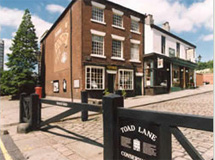 Simply stated, a cooperative is an organization or business that is user-owned and user-controlled. Co-ops operate as not-for-profit entities. Any profits, often referred to as savings in a co-op, are returned and are usually distributed to its members in the form of cash, credits or stock.

History: It All Started on Toad Lane
Today’s cooperatives trace their roots to 19th century England.

More than 150 years ago a small group of workers in the Village of Rochdale launched an economic experiment that would later spread throughout the world. On October 24, 1844, 28 weavers banded together to form the Rochdale Equitable Pioneers Society with the simple goal of stretching their meager earnings by pooling their resources to purchase needed supplies in larger volumes and at lower prices. The small, first-floor storefront they rented as the base of their operations was located at 31 Toad Lane. This memorably-named site is now considered the birthplace of the modern era of cooperative businesses.

The Society did not originate the cooperative idea of individuals working together to achieve what they could not accomplish alone. This concept had been around for many years as evidenced by the Mayflower Compact that the Pilgrim’s signed before sailing to America and the mutual fire insurance companies founded by Benjamin Franklin in Colonial Philadelphia. The significance of the Rochdale Pioneers was not in what they did but in how they did it.

The foundation on which they built their organization was set of practices and descriptions now known as the Rochdale Principles. None of these ideas was totally new, but together they produced a business system that was unique. These principles included:

The primary goal of the Rochdale Pioneers was modest – to simply lower their production costs to increase their incomes. It is unlikely that any of these desperate weavers with little formal education cared much about the concept of cooperation or realized that they were establishing a longterm worldwide movement. While modern day business practices have brought change to this original set of principles, the essence of the cooperative business model embodied in them continues to this day and are clearly the basis of the 8 Cooperative Principles that form the basis for all cooperatives formed since.